Cursebreakers Wiki
Register
Don't have an account?
Sign In
Advertisement
in: Characters, Male characters, A Curse So Dark and Lonely characters,
and 3 more

Grey, also known as Commander Grey, is the former Commander in Prince Rhen's guard. He is also the half-brother of the prince.

Grey believed to have been born to a farmer couple and had nine younger siblings, who later turned out to be his adoptive family. They were humble. When Grey was young his father was badly injured, he became caught in a thresher, and dragged by a horse, he could no longer work, or walk. Grey helped his family as best as he could, but the family was forced to sell most of their land and livestock. He heard of the castle accepting ten new guards every year so he chose to apply to the Royal Guard and got the position as a guard at Ironrose Castle. He had to forswear any connection to them, but the family would be favored economically.

After the curse was set in place, three hundred and twenty-seven seasons later, he was the only one alive from the Royal Guard.  he was the only one who survived and became the last person along with Rhen to still live in the castle. They became good friends, even though Grey had an oath to protect Rhen.

A Curse So Dark and Lonely[]

Grey travels through dimensions to find girls for Rhen, so one of them might fall for him and break the curse.

Harper sees Grey trying to kidnap a girl in Washington, DC, and decides to attack him with a crowbar. He ends up taking Harper to Emberfall. They instantly dislike each other.

When they are in Emberfall, Harper tries to flee but is stopped by Rhen and Grey. Grey shows Harper how to use a knife, and they start to get along. Harper tries to flee again later, but this time she gets into trouble with soldiers from Sylh Shallow. Grey and Rhen take Harper, and Freya and her kids to the Crooked Boar Inn.

Grey stands guard, and when Harper wakes up, they play with hand-painted cards and play a game called King's Ransom. Rhen comes downstairs, and Harper leaves, leaving Rhen and Grey playing cards. They talk about how Harper doesn't like Rhen and how he managed to get Harper to play cards. To that Grey responds: "I did nothing, I simply just asked."

After Grey attacks Lilith, and they vanish from Emberfall to modern-day Washington, DC. Lillith reveals the truth about him; that he is the late King of Emberfall's bastard child whom he had with a sorceress. He believes to have killed her and returns to Emberfall to his old home. There he has a conversation with his adopted mother, telling her that he knows he is not her son. He gets mad at her for letting him become a guard at his father's castle, but she reassures him that the King didn't know that Grey was his son. After the conversation, he states that he cannot go back to Ironrose, because of the risk of him being recognized as the true heir to Emberfall's throne. He asks his mother to bury his weapons so that they will not be found, and afterward he decides to leave his old home.

Grey is described to be tall and muscular. He has brown hair and brown eyes.

Harper and Grey didn't have a good start, after he dragged her from her world into Emberfall. Over time, they end up getting well along, trusting each other, and become great friends. Harper teasingly calls him Scary Grey.

Originally a relationship between prince and guard, Rhen and Grey formed a friendship because they spent so much time together fighting the curse. After finding out the are half-siblings, their relationship becomes complicated.

Jake and Grey had a rough start, with Grey dragging Harper along with Jake and his boyfriend Noah to Emberfall in an attempt to save them of being shot. The two have been at odds, their opinions often colliding. Over time, the two of them grew closer - so much, that Grey sees Jake as on of his best friends. 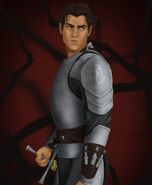 Official art by kf1n3 for the release of A Curse so Dark and Lonely
Community content is available under CC-BY-SA unless otherwise noted.
Advertisement