Cursebreakers Wiki
Register
Don't have an account?
Sign In
Advertisement
in: Characters, Female characters, A Heart So Fierce and Broken characters,
and 2 more

Lia Mara is the current queen of Sylh Shallow.

Lia Mara was born to Karis Luran, the former late queen of Sylh Shallow and an unnamed warrior. She has one younger sister Nolla Verin; they were both raised by their mother in the Crystal Palace.

Despite being the eldest daughter, her mother decided that she would not be the one to inherit the throne, for she had a sweet character, and therefore her mother did not believe her capable of being queen. In result, her younger sister, Nolla Verin was named as heir to the throne.

A Heart So Fierce and Broken[]

After a long carriage ride with her mother, sister, and escorts, they arrive at Ironrose Castle to have an audience with Rhen and form an alliance in which Karis Luran offers Nolla Verin as a wife, the audience does not go well, and they are forced to leave the castle.

On the way back to her land, Lia Mara takes her escorts and returns to Ironrose Castle without saying anything to her mother and sister, her idea was to respectfully negotiate with Rhen, he outsmarts her and kidnaps her, in the process killing her escort.

Locked in a room in the castle, Lia Mara regrets trusting Rhen, and thinking of a way to run away, she discovers a way to move the back wall of the fireplace and thus enter the other room, and doing so, discovers that the occupant of the room next door is Grey, who had also been taken hostage by Rhen. She hides behind the curtains but Grey discovers her and at first, doesn't trust her, but he doesn't give her away.

When Rhen takes Tycho and Grey to whip them and Grey knocks everyone unconscious. Lia Mara helps them escape and tells him she will give them asylum in Syhl Shallow and intercede for him with the queen as she discovers that he is the true heir if the guarantee her a safe return to her land.

Lia Mara's personality traits differ greatly from the rest of her family. She abhors violence and instead values gentleness and compassion. she is often unsure about herself, questioning her own strength. 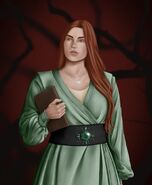 by montherox
Community content is available under CC-BY-SA unless otherwise noted.
Advertisement